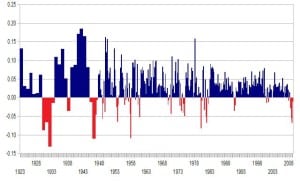 An increasing number of economists and corporate leaders say the risk of the U.S. dipping into a recession is rising. More than anything, they have pointed to the global growth slowdown and convulsions in financial markets.

According to the Wall Street Journal’s monthly survey of economists, the average estimate of odds of a recession starting in the next twelve months jumped to 21%—double the count from a year ago and the highest since 2012. Economists at Bank of America Merrill Lynch place the chances even higher at 25%.

In recent testimony before the Senate Banking Committee, Fed Chairwoman Janet Yellen said that the central bank is monitoring global financial markets, but reiterated her opinion that an economic contraction is not imminent. She emphasized that the Fed is keeping a flexible outlook on interest rate changes, but recent developments have not downwardly shifted the risk balance.

Market and corporate sentiment have slid recently, and some, but not all, economic indicators have followed suit. Decreases in both oil drilling and output from utilities have prompted the decline of industrial production, and employment in the oil sector has slipped sharply. A similar decline in energy production, coupled with a strong American dollar, has put pressure on manufacturers. Factory activity decreased in January for the fourth straight month, according to the Institute for Supply Management.

On the contrary, household spending continues its rise, up 3.2%. While incomes have grown slowly, the dive in gas prices means incomes are outpacing inflation. Labor market barometers show healthy readings, including the 4.9% unemployment rate, down from 5.7% a year ago, and the underemployment rate which has fallen to 9.9% from 11.3%.

Economic activity has remained stable despite market turbulence, according to Ram Bhagavatula, an economist at Combinatorics Capital, a hedge fund. The evident disparity presents a conundrum for the Fed, which projects continued modest economic growth and gradual increases in interest rates and inflation. The Fed will have more to say about its growth outlook after its next policy meeting in mid-March, but it is paying attention to foreign economic developments that pose risks to U.S. growth.

Capitalize on Growth with Capstone

Whether we’re simply seeing a market correction or a full-fledged recession, Capstone is here to help. We help businesses and subcontractors take advantage of opportunities for growth with diverse business funding and financing options. For qualified subcontractors, Capstone provides single invoice factoring for work performed under contract with a creditworthy general contractor. Capstone has highly experienced construction professionals on staff to facilitate the purchase of construction-related accounts receivable. For more information, read our blog, visit our Capstone Capital Group homepage, or contact us today.