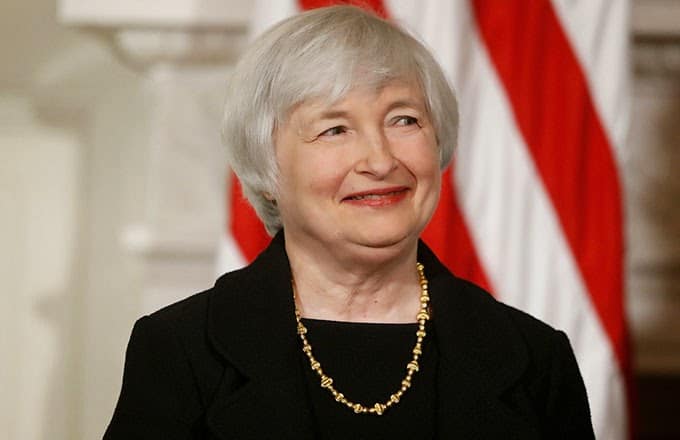 On May 7, 2014, Fed Chairwoman, Janet Yellen, testified before Congress and provided information on a host of issues relevant to all of our businesses.
Ms. Yellen found that business is rebounding at a fast pace and making up for the loss of business in the first quarter of 2014 which was down primarily due to the harsh weather experienced during that time.
Ms. Yellen would not comment on when interest rates would be raised.  However, the point is that interest rates will continue to remain low for the foreseeable future.  Obviously with budget deficits as large as they are within the Federal Government, it will be difficult to pay a higher rate on government debt should rates rise with so much short-term government debt outstanding.
Ms. Yellen was bullish on the stock market and indicated that there is no bubble as a result of the Fed’s policies.  She did indicate that certain sectors may be reaching historic highs, but there is no risk to the overall financial system or the stock market from these pockets that may have higher than normal price-earnings ratio and valuations.
Ms. Yellen extolled the benefits the Fed’s policy has had in the housing market.  She equated the Fed’s policy to bring back wealth to many citizens who are homeowners but were once underwater as a result of the financial crisis.  She expressed concerns about the job market because the unemployment rate, when combined with the labor force participation rate, demonstrates that the employment market is not healthy.  She sites that those unemployed for at least six months and those working part time but would prefer a full-time job, are at historic highs.
What does this mean to you as a small business owner?
Just for fun, what does this mean to you as a person?
Now is the time to arrange a spot factoring facility with a company like Capstone Capital Group, LLC for your working capital needs to fund your expansion and increased staffing costs.
To view the full hearing click here
Read More

How Much Time Do You Have?

19:00 10 April in Blog
Now that you’ve assessed your progress to date upon the close of the first quarter, its time to determine how much time you have to get going.
In an article in the Wall Street Journal from April 1, 2014 entitled, “Creating A Path To Bankability,” the author discusses the various finance tools available to small businesses looking to expand.  The main point of the article is that while many alternative lenders exist for the sole purpose of preying on small businesses that do not have the financial stability to acquire more affordable financing, there are lenders that provide alternative lending solutions which put the company in a better position than where they started.
The reality behind inexpensive financing and SBA loans is that they require a significant amount of time, and as the old adage says, “time is money.”  How long can you afford to wait to grow your business while you shop your loan around to various lenders who will take months to review stacks of paperwork that will be required of you?  My guess is, if you’re looking for financing you’d like to get it as soon as possible.  Any time spent with your application on someone’s desk is time spent NOT growing your business.
Capstone Capital Group, LLC’s approach to this problem is very straightforward.  Within minutes of receiving an application, we are running searches and reaching out to you to acquire the information we need to make a fast decision.  We are as eager to do business with you as you are to do business with us.  Our process can be summarized with two very simple questions:
If you answered yes to both of these questions, there is no reason to let opportunities continue to pass you by.  The best part about working with Capstone is that there are no long term commitments and we are willing to work within any bank relationship you may already have in place!  Better yet, continue to work towards getting that SBA loan you have your heart set on and factor your invoices with Capstone to bridge the gap between applying for and securing your SBA loan.
Contact Capstone today to find out more about our invoice factoring and trade finance solutions.  Stop waiting, you’re running out of time!
Read More